Climate clock given to a first UN ambassador in front of giant clock, as it goes from “Deadline” to “Lifeline” 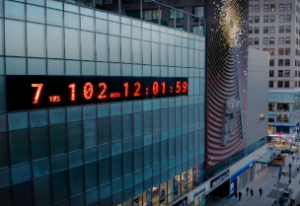 The clock was presented to the UN Ambassador, his excellency Mahama Kappiah, by Jerome Ringo, former chair of the National Wildlife Federation, and currently Goodwill Ambassador to the Pan African Parliament.

Kappiah is the first UN ambassador to receive a climate clock, with the hope that more of these clocks continue to spread throughout the UN. Ringo will be taking more handheld clocks to several African leaders when he travels there later this week.

Ringo stated: “This clock is a call to action. Future solutions are great, but we need NOW solutions. Solutions that create green jobs that can replace the fossil fuel economy.” The moment was celebrated by a significant change in the now famous giant clock: a sign of hope.

The Deadline that has been displayed since it’s launch in September is now joined by a new “Lifeline” that displays the percentage of global energy currently supplied from renewable sources — 12.2 percent, and going up, but it needs to be going up much faster to meet our deadline. For more information on the science behind the clock:  https://climateclock.world/science.

Ringo used the shift in the clock to speak to the different responsibilities that different nations had for meeting our climate deadline. “Africa, like other developing regions who suffer climate impacts from CO2 historically released by industrialized nations, deserves a lifeline. They need countries like the US, that are the greatest contributors to the problem, to contribute the most to this renewable lifeline that is on the clock. The United States is only 5% of the world’s population but is responsible for 25% of the world’s carbon emissions.”

Also at the event were climate activists Xiye Bastida, Alexandria Villasenor, and Ayisha Saddiqa, many of whom are also receiving clocks and taking them to the Biden Global Leaders summit in Wash. DC on Earth Day.

Zoetic is a solutions provider focused on delivering critical energy, water, food and healthcare technologies to areas of greatest need. Working in conjunction with its technology and strategic partners it has assembled a compelling portfolio of now solutions for now problems.

Zoetic means, “of or pertaining to life.” It embodies the dedication of its Co-Founder and Chairman, Jerome Ringo, who has been a leader in the climate movement for two decades. Zoetic is focused on the inclusion of areas of the world disproportionately impacted by climate change. Zoetic believes that critical solutions exist, what is needed is a next level commitment by leaders to implement them.